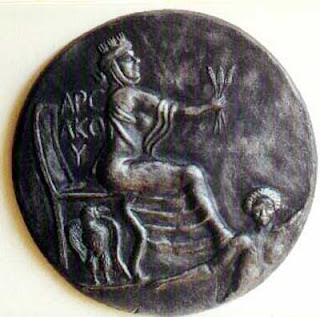 August is the eighth month of the Gregorian calendar and the third month of Summer’s rule. In the old Roman calendar it was originally the sixth month, and was hence known as Sextilis. It then consisted of twenty-nine days. Julius Caesar’s reformed calendar extended it to thirty days. Augustus added still another day to it, which he took from February, and renamed it in his own honor. He chose August rather than his birth-month of September because in the first place it came immediately after the month named in honor of his great prototype, Julius Caesar, and in the second because it had proved itself a propitious season in his life.

In Ireland, (in the Irish language) August is known as Lúnasa, a modern rendition of Lughnasadh, named after the god Lugh and August 1, (Lá Lúnasa) in the Irish Calendar is still regarded as the first day of Autumn. The first Monday in August is one of the public holidays in the Republic of Ireland. In the old Japanese calendar, the month is called hatsuki (葉月). In Finnish, the month is called elokuu, meaning “month of reaping”. The Anglo-Saxon name for this month was Weodmonath, “vegetation month.” Aranmanoth, “corn ears month,” was the Frankish name. The Asatru call it Harvest. The Irish name this month Lunasa or an Lunasdal. It comes from the early Irish Lughnassadh, the festival of Lugh.

The first Full Moon is called the Sturgeon or Corn or Barley Moon, names it shares with September. August’s moon is also referred to as the Dispute Moon and the Moon When Cherries Turn Black. It shares the name Thunder Moon with July.